Public or Private Displays of Affection? The day of love and romance means different things to different people.  To some it’s all flourish with big bouquets and huge heart-shaped boxes of chocolates.  To others, it’s a special note or hidden lingerie waiting to be revealed in private.  Which leads me to today’s question:

Nothing is more public than the surprise proposal during a big game or on a game show…or in the middle of a dinner party, but is that romantic.  I know I’m not the only one who cringes when I see one of those proposals – first I feel for the woman …talk about pressure!  (I’ll use the traditional couple for discussion sake – you know any combination of ask-er and ask-ee is possible.) But then I wonder if the guy knows whether she’ll say yes or not…getting denied on national television would be the ultimate rejection.  The end is almost always happy, but talk about stress!

On the other hand, a public proposal means the guy is putting all his cards on the table.  He’s saying “Look, I love this woman, and I want the whole world to know it.” He’s now accountable to EVERYONE, promising us as much as his wife that he’s hers.  Now that’s commitment.

The quiet, private proposal doesn’t have that kind of pressure attached to it…or does it? The surreptitious sliding of a velvet box across the table in a noisy restaurant or the spontaneous dropping to one knee has it’s own risks. The “you’re joking, right?” answer has a better chance of making an appearance…but so does the “Oh yes!” followed by more demonstrative affirmation. Is that more romantic?

So what do you think?  Is footsie under the table more romantic than a make-out session on the subway?  A song dedication on the radio or a special CD slipped into your bag? “Marry me” shouted in front of the cameras or whispered in a darkened room?

In any case, I wish you love and romance today!

Once Upon a Twilight is hosting a blog hop that includes a TON of prizes, all relating to books and love.  There’s over twenty prizes being offered on their site alone, including an autographed copy of Whirlwind.  The giveaway  runs through the 16th, so check it out!   I’m also one of the many guest blogger at http://www.onceuponatwilight.com during the hop, so there’s lots of love to go around.

GUYS:  VALENTINE’S DAY IS MONDAY.  Shop now or you’ll be stuck in line at the market on Monday with a tired clump of $50 roses and a lame card. (Okay,you too, Girls!)

GIRLS: VALENTINE’S DAY IS MONDAY…the last day of the Lookin’ for Love Web Hunt! (Yes, guys can enter too! :-))

Whether you’re planning a romantic dinner or a quiet night at home, who wouldn’t like to win a whole library of sexy ebooks?  Click on the banner to go to the entry form and the list of authors who have conversations hearts hidden somewhere on their websites.  Fill in the saying on each one, and you’re entered!  There’s a ton of other prizes too, so if you love to read romance, take a look around and find those hearts!

Congrats to Megan Q, the winner of an autographed copy of Whirlwind for her comments over on Coffee Time Romance last Monday.  Your book is on its way!

Did you miss that opportunity?  Check out Once Upon A Twilight on Monday for another chance.  An autographed copy of Whirlwind is just one of the great prizes during the Books With Love Hop, February 14-16.  Watch for my guest post, coming soon.

Till then, I think I have some shopping to do…

Win a Copy of Whirlwind Today 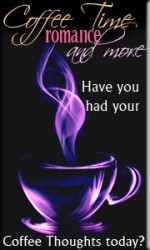 Come on over to the Coffee Thoughts Blog at Coffee Time Romance and enter to win an autographed copy of Whirlwind .

This month’s topic is Romance, starting at noon EST, and I would love for you to join the conversation!  ONE LUCKY COMMENTER WILL WIN AN AUTOGRAPHED COPY OF WHIRLWIND!  I bet you’ve got something to say about:

These are just some of the topics that might come up today.  I’ll also be posting a couple of excerpts from Whirlwind, and there will be excerpts and giveaways from other authors, too! Join the discussion by adding a comment to one of my posts on the Coffee Thoughts Blog, and you’re entered to win Whirlwind! The contest runs until 8pm EST.

Did you find my heart?

The candy heart somewhere on my website? Then you can enter to win the Lookin’ for Love Web Hunt! Click on the banner for more information:

Whether your a reader or a writer, there’s a lot of great information and fun on the Hop.  Check it out!

I’ll be Blogging on Coffee Time on Monday

Join me on Monday over on Coffee Time Romance’s blog for the February Book Brew.  As part of their Valentine’s Day celebrations, I’ll be chatting about all things love and romance with readers and authors and giving away one autographed copy of Whirlwind to one lucky commenter. To enter, comment on my posts over on Coffee Time’s blog.

I’ll also be posting a couple of excerpts from Whirlwind, so please stop by and join the fun!

One commenter on Coffee Time will win an autographed copy of Whirlwind!

Come chat with me! Remember, you must comment on Coffee Time’s blog on Monday to be entered in the giveaway.

Can you believe it’s February already?  Valentine’s Day is a couple weeks away, but romance is already in the air.  Roses and candy fill the store shelves, and even here on the internet we’ve broken out the conversation hearts.

Speaking of which…there’s one special candy heart somewhere on my website. Find it, and you can enter to win enough romance to fill your bookshelf in the Lookin’ For Love Web Hunt.

To participate in the web hunt, all you have to do is:

When you correctly identify all of the candy heart sayings, your form will be entered into a random drawing for prizes. Grand prize is the entire eBook collection of Omnific Publishing’s titles then in publication! The runner up will win eBook editions of five Omnific Publishing titles of his or her choice. Ten additional winners will each win an eBook of A Valentine Anthology.

If you don’t want to wait, during its anniversary celebration, Omnific Publishing is offering a special:

More giveaways are coming, so get ready to add all kinds of romance to your (reading) life!