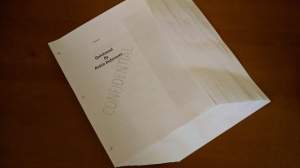 The manuscript for “Quicksand”

It’s been a loooong time since I’ve posted. There’s been a lot of stuff going on in my life, but suffice it to say that things are going well. What matters most is that the sequel to Whirlwind, titled Quicksand, is being prepped for publishing! It’s been a long time coming, but I’m targeting a spring release.

Are you ready for more Melissa and Jason? How about a little taste now?

From the upcoming book jacket:

Melissa Williams walks away from her family, her friends, and her home to spend the summer with new love, Jason McAlister.  Life in the Midwest is not the fairytale their whirlwind romance was. Jason’s ex-girlfriend hates her—that’s not so bad—but so does his best friend, Grant. Even Jason is upset with her, jealous of the baseball players it’s her job to interview.

Melissa tries hard to fit in, but a series of suspicious coincidences and unsettling secrets pulls her further and further away from Jason. Like a runner caught between bases, she is trapped between those Jason has known and trusted for years and a web of drugs involving athletes and the drive-by shooting of Jason’s friend. Unless Melissa can find enough evidence to convince Jason those around him aren’t what they seem, she will lose the dangerous game she’s stumbled into.  And in this game, losing means death.

Watch this space for more tidbits, the cover reveal, and release information.

Thanks for sticking with me, and with Jason and Melissa!

Today is the summer equinox, and also International Short Story Day. On the shortest night of the year (or day, for those of you down under), we’re celebrating short stories. And the best part? You can read my vampire romance short story for free (CLICK HERE).

As a writer, I find short stories very challenging, especially if they are not related to an existing novel. Starting a new story, defining the world it takes place in, and introducing new characters in a short story format can be challenging! I have to stick to the KISS mantra (Keep It Simple Stupid) – which makes it a great writing exercise.

As a reader, a short story is a great way to escape into prose without committing hours and hours. I’m the type who can’t put a book down once I start it, so short stories are like snack bags of chips vs. the big bag. A short story satisfies my craving without stealing me away from real life for too long.

What do you think? Do you read short stories? Like them? Dislike them?

For more short story fun, be sure and check out our short story blog hop! Find stories and authors to check out by clicking on the photo:

Which Avenger are you?

The family made it to the theater last weekend to watch the comic-book-based adventure “The Avengers,” and it was a blast. Violent – yes – but in more of that comic book kind of way. Lots of alpha males, special effects galore, and school-yard humor made it a fun family outing for my teens.

I really enjoyed the “new” superheroes I got to meet. Hawkeye and Black Widow were two who were new to me. I loved how Black Widow held her own in a room full of testosterone-driven egomaniacs. And her superpower was subtle, but cool! Which got me thinking…

Which superhero would you want to be? (You can pick anyone, not just those featured in the movie) Would you want the ability to fly, super strength, genius brainpower, indestructibility, or something else?

Me? Well, what I need is the ability to be in two places at the same time. But Black Widow’s power could be cool…(I don’t want to spoil it, though).

PS. if you do go to see The Avengers, be sure and stay until the very end of the credits. There’s two bonus scenes, one toward the beginning of the credits, and one at the end.

Filed under Just for Fun, Movies

Man, I’d intended to take a couple months off and finish the sequel to Whirlwind, tentatively titled Quicksand, then get back to the Internet world.

Obviously, I lost track of time!

First, Quicksand: I underestimated how complicated my little romantic suspense would get! Quicksand is currently looking like it’s going to be around 25% longer than Whirlwind – at least in the first draft. Whirlwind was 19 chapters, Quicksand is rolling up to 23. More Jason, more Melissa, a little more Mitch, and some new characters who can be mysterious, snarky, and in some cases, devious. I hope to make some bigger announcements soon!

Speaking of Jason, he’s part of an upcoming contest at Bookish Temptations! He’s part of the “Men of Omnific” who’s-who contest. Each day you’ll have the chance to match up the heroes from Omnific’s titles to images representing each leading man. I’ll give you a hint – if you followed the Whirlwind blog tour hosted by Missie at The Unread Reader or her “My Book Boyfriend” feature, you’ll have a BIG clue as to who Jason is.

To find out more, click on the banner! Contest runs from May 14-18

Finally, how would you like a fun read for FREE? My short story, Concessions is now available for download at Omnific Publishing for ZERO dollars (the epack includes formats for kindle, nook, and PDF). If you’d like a quick romp with a sexy vampire in the heat of Las Vegas, be sure to check it out!
(It’s also available on Amazon for 99 cents if you’d like to download it directly to your kindle. Hopefully that price will drop soon.)

Year End Joy to You

As the holiday season winds down, I want to wish you all the best for this and the coming year. May you be happy, healthy, and surrounded by love in 2012!

Before 2011 disappears completely, though, Omnific Publishing has one last gift to give. Through December 31, 2011, if you purchase one ebook from their online store, you can get a second 50% off. Just use check out code ebooks2011.