Day 4 of RT meant only one thing for me: the Book Fair, which didn’t start until almost 11. That left us time in the morning to pack and get out of the hotel for a few minutes. We tracked down an Ihop a few blocks away and had a real breakfast for less than the $30 I know some people paid in the hotel.

Of course, being L.A., we didn’t have to walk a block before we caught a film crew:

I have no idea what they were filming, but they were using the beautiful L.A. Public Library as their setting. Gotta love California!

Packing meant I had to find places to stow all the loot I’d collected. I promised you a picture…and for reference, this is Killian’s queen-sized bed: 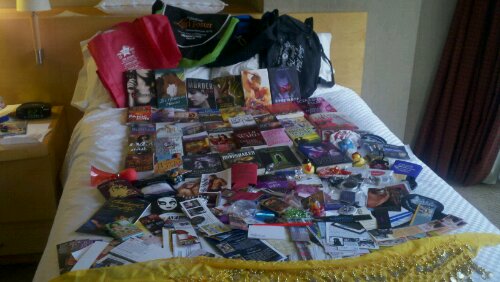 What are you looking at? How about 36 free books? If I’d paid full price, I would have spent $381.74 for them.  That almost makes up for the conference fee right there. In the bottom half of the picture you see all the goodies and promo pieces. Bookmarks, postcards, sample reads, pens, pencils…those were the standard fare. Can cozies seemed to be pretty popular, I took home 4 of those. Other items included paperclips, reflectors, a hot pad, candles, rubber duckies, a coin purse, playing cards, rulers, even a bicycle horn. My favorite (being a practical person) was the pen-sized lint brush from “Between the Sheets.” That went directly into my suitcase!

I did actually buy 3 books at RT.  The first, Howdunit Forensics by D. P. Lyle, I bought at the bookstore after attending his workshop. I did catch him later and got it autographed. The second, The Ghost and the Goth by Stacey Kade, I bought at the Expo. It’s a YA that she’s gotten good feedback on by high school boys, so I’m hoping my son might like it. (Finding books for teenage boys is HARD). The third, Undertow by Cherry Adair, I bought at the Book Fair.  Cherry gave me lots of encouragement, and lit a fire under me to get this second book done! 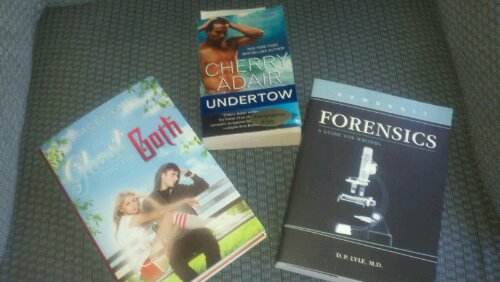 The Book Fair itself was huge–something like 5 times bigger than the Expo. I don’t know how anyone could possibly see all the authors in just three hours. Unfortunately, I didn’t have nearly that long, and since I wanted Cassandra Clare’s autograph, most of my short time at the fair was in line for her.  I did see Cherry Adair, and picked up one other little souvenir, a squishy horse that reminded me of Buckeye that has found a home in my daughter’s room.

Do I wish I’d had a table at the Book Fair instead of the Expo? No. I’m pretty sure just about everyone who came to the Expo passed by my table. With something like 20 rows of authors at the Book Fair, I think most of the attendees headed straight for specific authors and didn’t browse too much. Maybe I’m wrong, though.

Overall, the Convention was an awesome experience. I learned a lot, met a TON of people, and was so blessed to spend the time with two ladies I love, Lisa Sanchez and Killian McRae. Never have I had such an easy time with roommates, and I look forward to our next trip.  Anytime, any place, ladies, just give me a buzz!

Now that you’ve seen all the loot, how would you like to win some?  I’m putting together a contest for May that will involve a drawing from comments here on the blog. If you like romance and free books, keep your eyes open at the end of this month for instructions on how you can win your own basket of RT goodies!  And I’m sure a familiar title *cough*Whirlwind*cough* will be included.

Speaking of my good friend Lisa, be sure and check out Meet an Author Monday, hosted on her blog.  Just click on the photo below to check out what other authors are blogging about.  Are you an author? Join the hop with us and meet new readers!

Filed under On the Road

One response to “RT Roundup – the Last Day and Loot!”